What should I say, eh, neglected stuff, that’s what you folk call it, nice, I just call it too hard to move on to something easier! Ok, the castle was given to me by my girls when they were young, as a Christmas present in 2013 when I was doing the Medieval village.  It was to sit beside the other but it all got too hard with the painting, the colours didn’t seem right.  So I put it away as I had finished the village and lost interest in the subject by then.  Seven dios later I felt a little guilty that I hadn’t done anything with the girls’ gift so on paying more attention to Azazel and his mention of the January challenge, I thought well come on, it’s time to bring your neglected model out into the light and have a go.  Thanks mate, without your challenge I’m sure I would have avoided it as I couldn’t work out how to get the paint job right.  The older IMP tried to give me some advice but I feel he thinks I’m smart and can follow his detailed instructions, alas I’m but a simple soul and was about to give up again when the little lightbulb went off in Bunnings.  Yes! they had this amazing paint in a spray can that comes out with a granite effect! Totally incredible. The paint itself is water based and takes a while to dry so if you wish to try it, make sure you don’t touch it (very tempting though) you have to give it at least 12 hours to cure.

I had a bit (liar, a f…g lot .!!@@##) of trouble with the moat because I was using Woodlands realistic water, a truly great product but if you don’t get the base right it can be a bugger as it is just like water and will pool in low areas! The dio must have an even surface.  I now use a spirit level to check where it is likely to flow, then chock it up so it’s pretty level .

I do apologize I did say that I would post more ‘work in progress’ posts but time just gets away from this old guy, and I forget, but I will try to improve! Hahaha … little hope you say!

It was a bugger to put together,as some models are. There were a lot of gaps which I thought would be a problem filling until the younger IMP gave me the idea of using superglue and bicarb (thanks mate!),  it worked a treat, and it also strengthened the castle.  I have added a few little extras to the interior like the stables and what could be a kitchen or more accommodation for the guards .

At this stage it is just a castle and the surrounds but when the temperature drops and I go back to painting figures I will post another update. 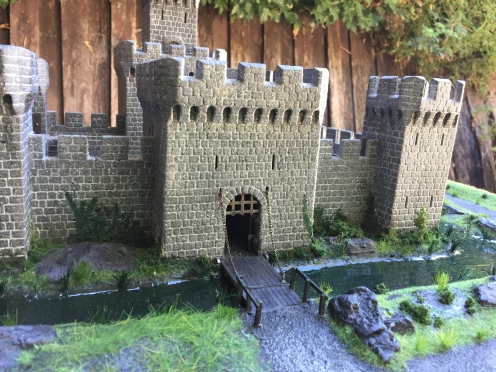 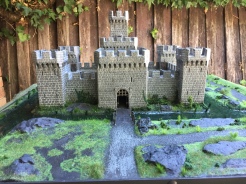 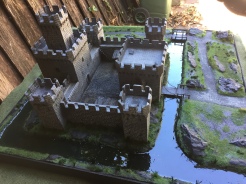 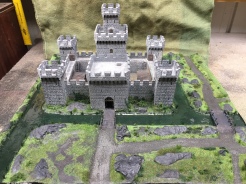 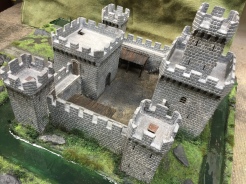 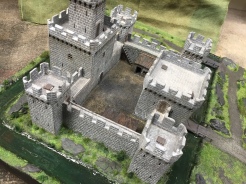