Well here we are in February and it’s supposed to be summer but it’s been raining cats and dogs after the terrible bushfires we had a month or so ago. Thank you all for your wishes in regards to our safety, we were fortunately a long way from them. To my American friends I have to say we Aussies were saddened by the death of three of your countrymen who died fighting the fire in NSW, they won’t be forgotten.

So it’s been an up and down month but I have been working hard in the shed and at the painting station.  I had to do ‘gift job’ for my tech adviser as she has made this blog possible as most of you would know.  It’s a small 9”x3” scene, just like a slice of the English Civil War (ECW) diorama but with only some cavalry.  Unfortunately I can’t share it with you yet as she has moved out and we won’t see her till April when I have my 65th birthday, and I can present it to her then.

But so as not to disappoint I knocked up a little ECW mini using the Waterloo 1815 Cromwell cavalry. As I’m very particular about size, I couldn’t use them on the big one as they are slightly larger and bulkier than the Revell guys.

Just a few notes on them – they are made of hard plastic so you can’t boil and change them as I always do to most sets so one is limited on poses. The bugler and pennant troopers have arms that need to be attached which is a gluing job but as I’m not a flag painting person like our young Marvin, I chose to convert him by adding a sword.  (He is the figure in the lead on the left).  As I say, it’s not a great set but adequate if you are only doing a mini.

The diorama is 6”x3”, a foam board base with a bit of the old hedge left over from the large ECW dio static grass 4mm and some of my home made flowers.

A glimpse into the future, another fantasy diorama, I’m just working on the base and making some really good wire trees, (think swamp like) and I’m painting up some Elves. I started with the Dark Alliance but have switched to the Caesar ones.  The other one is a mini using the Italeri French dragoons that I have just painted, so hopefully I’ll have something up soon. 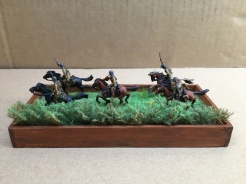 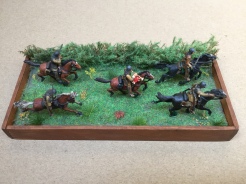 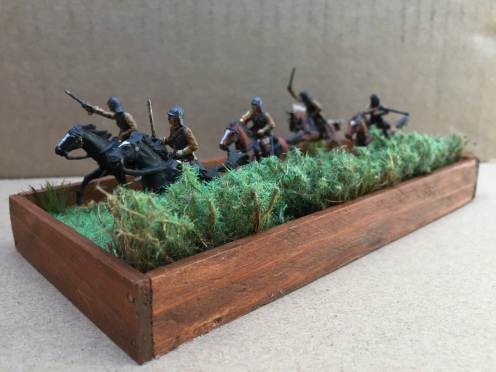 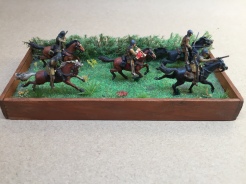