I decided that it was time to go down a bit in size as I am always saying, room, I need more room! So the answer was go smaller and this was the result. There are 285 figures on the board so it is pretty crowded but that was the effect I was hoping for as the roman battles would have been very ‘argy bargy’. The idea came to me when I was reading about the roman ambush in a Germanic forest (also a bit controversial) so I thought I would loosely base this one on that theme, and as I have always had a soft spot for the old Airfix ancient Britons since I was a kid, here was a good excuse to slip some on to a diorama .

The painting of the romans was a bit fiddly as was sticking the shields on, as there was a hole left where the shield boss was supposed to be. I fixed this with some blobs of white glue. The other warriors were more fun as like with the confederates on the American Civil War diorama, there were plenty of variables (I just didn’t do enough checks and stripes). As with all my painting I did these in the Winter along with the Vikings and Anglo Saxons for the next project. As the size was smaller it only took me 3 hours to put all the figures on, a bit of a record for me as I normally like to stretch it out. The only part that plagued me, as always, was tree placement. On this one I was trying to get the effect of a forest but if you have lots of trees you can’t see the figures and so after some consultation this is what we ended up with. The back picture was a little more difficult, selecting the right woodlands was harder than I thought, but then finally one of my daughters came up with this one which I feel is pretty effective. 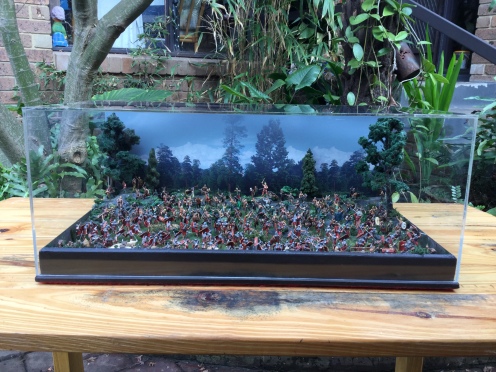 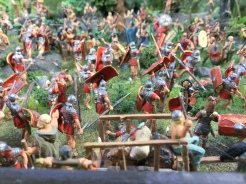 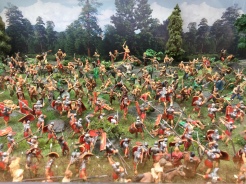 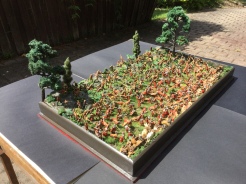 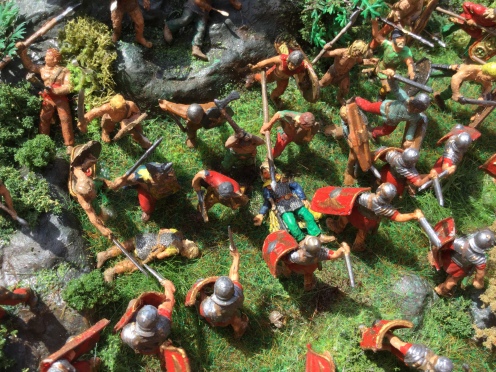 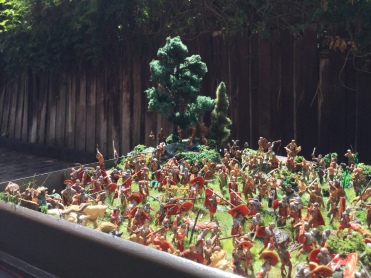