Being much bigger than the last, I ponder why it is that they are increasing in size again? I hold accountable the standard size timbre sheets that I use for the bases. The Medieval village was constructed on one base sheet whereas this one started at half the size. Somehow along the track it doubled itself to be the largest yet. Looking at it now, it’s not the best idea having two that need to be joined, it only equals more weight and I like to keep them as light as I can. For example my Euro/Arabic Steamboat diorama is 40×68 cm and weighs just a little over 3 kg /6.6lb. With no more room in the house I won’t be going bigger than this again. It’s good to remember, you may have good intentions to sell your piece of art but other family members might just say “no don’t sell it, I want this one”. They look grand but take up a lot of room so beware when it comes to size.

Why this subject? Well it was the first subject I did all those years ago with the old Airfix civil war figures. We all thought they were marvellous back then, being the only ones available. Just for those who just had a snigger, watch out, there are avid collectors out there pining for them. I tried to get a set of old U.S cavalry (only wanted them for the dead horse) and wow they are expensive for what they are. In saying that I’ve paid 80.00 AUD for an old Revell set but then again, I’m using every fig. A word of advise, be careful if you start bidding on Ebay. Let’s just say I avoid it now for the same reason why I stay away from house auctions!!

To my surprise, as it grew, I ended up placing 600 figures. These were fun to paint, my favourite so far. When you consider a normal military set the men are all the same but when it comes to Confederates there are so many variants due their station. Well to paint over 600 men takes a bit of time even if you are a slap dash painter like myself. I tend to feel I can hide this in crowds. (Some of you guys out there, take a bow; your painting  stuns me).

With so many men painted and ready to join their mates on the diorama I decided to expand. Always try to look for balance, and not just with the figures in mind, the trees and bushes also need to be placed  in just the right spot (don’t be scared to seek advice). One thing that was quite challenging was perfecting the grass since it was my first time using a static grass applicator. Wow now there is an improvement, a totally different look and great on a large surface area. A word, my man said he would get me one for 200 AUD. In late 2015 I found 2 from the US for 57.AUD and that included postage. So look around and make sure you really need one.

One thing I’d go back and change if I could would be the layout of the river. Minor I know but it just could have been done a little bit differently. It is hard to mess with a river if you are only using the base board as the stream/river bed instead of putting down some Foam core. And finally, this was my first attempt adding a back picture. A detail I’m interested in experimenting with further for future projects.

Confederates in a field.

Confederate at a snake fence. 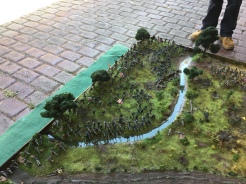 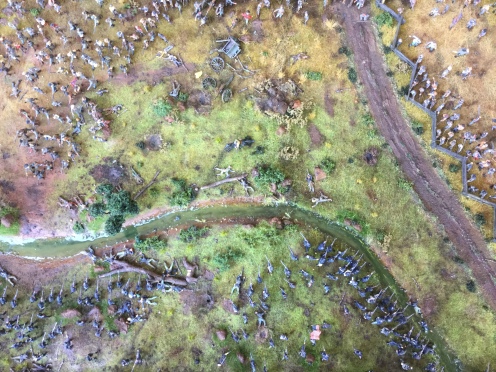 Union soldiers on the ridge

View of the rise