The next lot of figures are still in America and are for a smaller dio based on another favourite of mine, the Berdan Regiment of Sharpshooter. They were part of the Union forces used during the American Civil War, and wear the green as do my other favourites, the 95th, as my followers have heard many times!  The figures are again all Strelets and are a combination of Union and Confederates.  The good thing is the Confederates with kepis on can be used as Union guys to bulk out the variety of poses such as my use of the Confederates skirmishing set for sharpshooters .

I am yet to come up with an idea for the base as the original one turned out impractical, so we will have to wait and see. 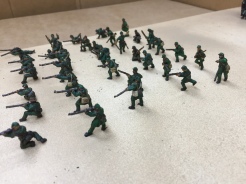 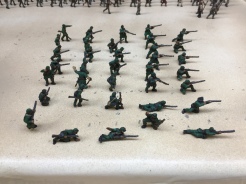