Again, the reason for this diorama was another Christmas present, this time an African house. Great, but what to do with it? Well for some strange reason I had taken a liking to the uniforms worn by the Imex American infantry guys from the Mexican/American War but didn’t know what to do with them. I did what any sane person would do, put it off and waited for a better moment. Soon a concept began to form, I’ll just put two half formed ideas together, throw in a vague desire for a colonial steam gun boat and a random mix of Arabs and African natives just to end up with something odd.

The choice of uniform colours I can’t explain. The Arabs and natives were painted from the painting guide on the boxes but with a few exceptions. The steamer is scratch built from balsa wood and the armour plating is aluminium drink cans burnt and painted steel grey. For the figures I used those mentioned above alongside some Hat Gatling gun crews picked up while on our U.K. trip in a closing down sale in Exeter (just what one does when on holidays on the far side of the world). The other guys are made up Esci Barbarians, Muslim Warriors, HAT Rugga Rugga,Hadendowa Camelry, Orion Turkish Janissary and Ukraine foot Cossacks and artillery.

This one took me approx. 2 months from start to finish. The only thing that gave me trouble was the water effect around the steamer. I learned a lot in regards to this and it took a few goes to get it into a reasonable condition.  It’s easy to do a flat stream or river but getting texture is a bit of a challenge. I just marvel at the work people do with it, check out ocean scenes on the web and you will be amazed.

One never knows where one will find an answer to a problem. Being an old guy I have pretty well come to the conclusion that it often is given by the person next to you, you just have to remember to ask. How to make a palm tree? They are manufactured but can range from average to good and expensive. As I would need a fair few I had a problem. Oh yeah, ask one of the kids, Bingo! Sometime later my daughter had knocked up a very handsome palm tree for me and before long we had a whole grove of them, cheap and not too hard to make.

Would I change anything? For one, I would use the house in a foreign legion job or in a Napoleonic Peninsular campaign as someone out there wisely suggested. Apart from being odd it taught me some new tricks and although it’s not one of my favourites I still kind of like it. 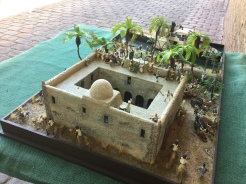 birds eye view of the house 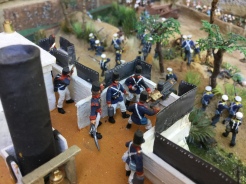 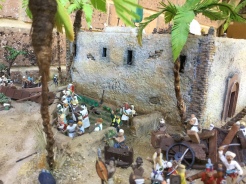 View from the river

View from the gunboat 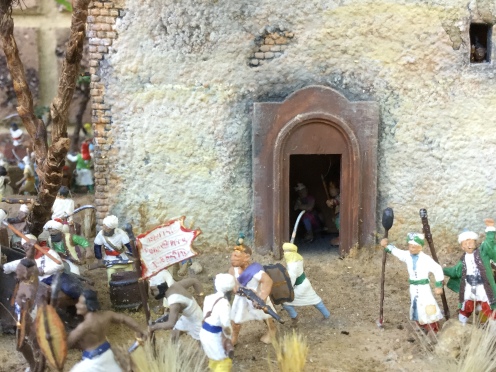 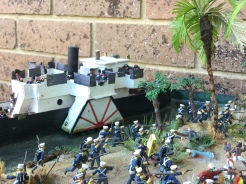 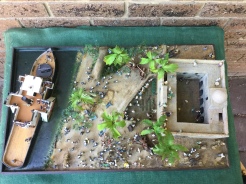 View from eastern side